Doctors are one of the support classes in DoMO: they can buff, heal and revive players, which make them a core member for parties. While they are not limited to rely on others to level, their lack of offensive skills can handicap them from soloing efficiently. Subbing skills from another job, or getting a pet to attack, will compensate this problem. 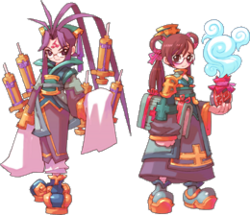 Doctor Skills are divided into Croakus Pocus, which require frogs to cast, Medical Treatment, which is mainly heals, and Doctor Skills (which allow for syringes to be subbed onto other jobs). The Croakus Pocus list of skills are comprised of buffs which can affect any player. The Medical Treatment skills can usually be used upon anyone with a few notable exceptions. Health Heist and Heavy Health Heist can only be cast on enemies (as they are the only attacks native to the Doctor class). Purify can also only be cast on enemies. Born Again can only be cast upon dead players, as one cannot resurrect someone already living. Detox can only be cast on party members. Finally Greater Healing can only be cast on party members. Doctors can utilize the Doctor's Spring to increase their skill points. Doctors utilize Syringes as their weapon, and many of the Doctor's Skills require a syringe to be used. Doctors are mostly for parties, however, there are rare Hybrid and Solo(PvP) Doctors as well. Hybrid Doctors require the most springs possible, as they must max not only party skills but solo skills as well. Thankfully, some skills overlap.

A Doctor is good at all medical skills. They're able to aid their team members by recovering their HP or by using frogs to improve attack and defense.

A Doctor is perfectly suited to using syringes, and relatively competent with wands.

A Doctor is competent using musical instruments and fans. Other weapons aren't really suitable for this job.

These skills can heal and support team members.

These skills can heal and support team members. For a beginner, the frogs needed for Croakus Pocus can be expensive, so pay attention when using the skills.

These skills enable you to equip syringes on different jobs.