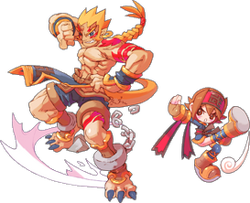 A Martial Artist has the greatest amount of HP, combined with the best recovery rate, allowing them to fight well without requiring medical attention from a doctor.

A Martial Artist also has good physical and magical defense, and can protect team members in dangerous areas from enemies of both the sword and magic-wielding variety. A Martial Artist has some offensive skills particularly effective against other players.

In an arena fighting other player characters, a Martial Artist can utilize their abilities to the full extreme.

The Martial Artists fights with their limbs, pursuing the goal of developing extreme physical potential. Without the protection of armor, they can move and dodge faster. The Martial Artists are good at close distance fighting, they use Qigong to assist in combat and enhance their body strength. Sometimes they fight with weapons like boxing gloves. The special training of the Martial Artists allows them to hang on longer before dying than other occupations and to wait for help.

Speak to the Martial Arts Master at the farm in Swan Lake Basin (X:619 Y:535). He will challenge you to survive one hit from his glove, which will be around 300 HP. If you survive, he will grant you the Martial Artist qualification and will transport you to the Dojo in Eversun City if you so desire.

A Martial Artist is perfectly suited to using boxing gloves and staffs.

A Martial Artist is competent using swords, sabers, daggers, and spears. Other weapons aren't really suitable for this job.

Power Attacks are more suitable for martial artists concentrating on defense. They can cause dizziness, reduce attack power or bypass an enemy's defenses.

Power Attacks are not affected by attack power, unlike other offensive skills that are strengthened by physical attack power.

These skills are suitable for Martial Artists concentrating on offense.

Many of the maneuvers in Staff Attacks have multiple hits. The damage of the extra hits is determined by the strength of the character's normal attack.

These skills enable you to equip boxing gloves and staffs whilst in different jobs.