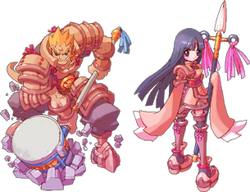 A Mercenary can equip heavy armor and shields, and has the best defensive power of all the warriors. In a team, a Mercenary plays the role of strengthening and protecting other team members. A Mercenary can use various weapons and switch between them at any time, utilizing the offensive skills of other jobs. The offensive skills of a Mercenary have the advantage of attracting the attention of monsters, and can be used to protect team members from monster attacks during battle.

They are usually retired soldiers who fight again for money. After long military training, they are good at armed battle using spears and tomahawks and know how to utilize armor efficiently. They are the most hardcore soldiers. The mercenaries attack with the widest close combat fighting distance. They can attack multiple enemies at the same time and use armor to fend off attacks as well. Although they don't have extraordinary attacking powers, the drill training and heavy armor usually help them become the last survivors.

Speak to the Mercenary Association Leader located in Tranquilton within Swan Lake Basin (X:374 Y:439) (walk through Eversun South if you cannot fly). After paying him 83 gold, he will give you three weapons (Mercenary Trial Saber, Mercenary Trial Sword and Mercenary Trial Staff) along with a Mercenary Test Certificate. You must get all three weapons from their durability of 120 to a durability of 99 or below by attacking monsters with these weapons. This can be easily achieved by using the Maniac Attack skill, if you have the Blademaster job. Once you have done this, return the weapons to him to unlock the job (the certificate will be taken automatically). He can teleport you to the Dojo in Eversun City afterward.

A Mercenary is perfectly suited to using axes and spears, and relatively competent with swords, sabers, and daggers.

A Mercenary is competent using boxing gloves. Other weapons aren't really suitable for this job.

Ax Attacks include attacks for single targets and area attacks, skills that draw a monster to attack, and skills that strengthen your defenses (Recommended for Solo Mercenary builds).

These skills include many special formation skills, the power of which depends on the number of team members in the formation.

These skills enable you to equip spears, shields, and heavy armor whilst in different jobs.