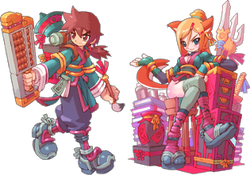 A Merchant has the ability to use medicine on team members, and can make special snacks for pets from ingredients collected from meditation. These snacks can strengthen a pet's elemental attributes.

Although they are not the most powerful warriors, Merchants know very well how to use magic spells to inflict damage and weaken their enemies. Being Merchants, they need to use their money to fight and create spells, so they must be ready to pay when the time for battle arrives… For them, the greater their capital, the greater their power.

Merchants can be good friends to have in a group when facing epic adventures, because they are able to support others by manufacturing goods and using medicine effectively on team members. They can also make snacks for pets, thus strengthening pets’ elemental attributes.

Every player can hock [sic] their wares, but it's the Merchant who gets the most bang for their buck. With their trusty abacus in tow, a Merchant can calculate exactly what they need, improving luck for material gathering and item crafting. Their knowledge of exclusive trade secrets allows them access to manufacturing special goods and services available nowhere else, and they know how to put their money to work for them - by using it to deal damage and extort unsuspecting monsters! Best of all, as a player grows in the Merchant job, they can open up additional selling stall slots and rack up a break on city taxes! It may not seem like a class primed for the heat of battle, but there are many advantages awaiting those willing to walk the path of the Merchant.

To obtain the merchant qualification, visit the Merchant Careers Advisor at X:163 Y:86 in Eversun City. He will require a fee of 10,000 gold to obtain an MBA and to return to him with a level 23 weapon of his choosing (Frosty Foil, Fiery Saber, Damp Dagger, Willow Leaf Bow, Smiley Syringe, Granite Gloves, Fine Feather Fan, Zither, Wispy Wand, Hair-Raising Halberd or Iron Staff). The Iron Hammer and Iron Abacus do not appear to be used in the qualification.

Note: Neither the gold nor the weapon will be returned.

A Merchant is perfectly suited to using abacuses, and relatively competent with axes.

A Merchant is competent using swords, sabers, and daggers. Other weapons aren't really suitable for this job.

These skills use money to make shields, prepare insurance or make snacks for pets using ingredients collected from meditation.

Trade secrets also includes the ability to use medicine effectively - a useful talent for jobs that rely on medicine.

These skills use money and the abacus to attack or weaken enemies.

These skills let you equip abacuses whilst in different jobs.