Pets are companions which may be used for fighting. Our character can hold up to 5 pets. You can summon one of each of the following categories at the same time: a pet or an non-evolvable pet + an eggsploiter pet + a vanity pet + a monster from Pandora's Box Hanging.

Love -- Evolved from Love Egg. Has buffs and debuffs; non-elemental.

Dragon -- When evolved, this pet has three types:

Kuku -- When evolved, this pet has three types:

Special edition (SE) pets refer to pets with a skin recolor. They can be obtained through the Pet Exchange, or from the item mall.

Kuku, Dragons and SE4-SE12 pets have a 10% chance of becoming King pets on their last evolution. Kings have boosted stats or additional skills compared to their non-king counterparts. They also appear physically larger than others. The King name is visible when the pet is traded or placed in a Pet Hibernation Box.[1]

There is 4 types of non-evolvable pets:

As Non-Evolvable pets are based on monsters (except the Yun Sheng Beast and Alpaca, which only come in one type), their variants are not numbered but instead named after the monster they are based on, and there is no "default" version of these pets.

These pets can be found within the IM and are tradable. Evolving them requires multiple copies of the same pet + their corresponding true or ultimate evo scroll. Sometimes Hair Dye is also required.

All pets can be vended in stalls and mailed to another player by using a Pet Hibernation Box. They may also be traded between players without the item: a special space in the trade window is reserved for pet trading. It is, however, impossible to know if the egg is a special edition pet in both cases, as names can be easily changed with a Pet Naming Tag.

When you first obtain a pet or non-evolvable pet, it will have 100 loyalty (the maximum); however, this amount declines. Every day its loyalty will drop by 1 point (only noticeable upon re-log or area change). When the pet dies, its loyalty will decrease by 10. When your character dies with the pet summoned, it will decrease by 10. Note that since the pet will remain summoned after your death, it is possible to have your pet killed after your death and lose 20 loyalty at a time.

Pet loyalty can be restored by playing with the pet, restoring 1 loyalty point every few minutes:

It is also possible to restore loyalty by feeding the pet one of the various pet foods such as Pet Treat for 2 points, or with a Fidelity Fruit for 30 points.

Using a Pet Hibernation Box will prevent the daily loss of loyalty points.

Pet loyalty will automatically restore to 100 upon evolution, using a Tai Chi Mirror restores loyalty if pet passes lvl 11, 41, or 61.

All pets in the pet window need loyalty 50 or higher to accept commands other than recycle.

Right clicking a summoned pet displays a menu with the following commands:

The chat commands can be dragged to hotkey bars for easy access. 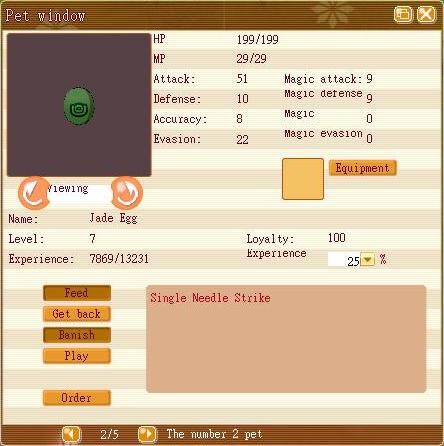 The pet window is accessed via Ctrl+V. In the upper right of this window is a button to switch between full and simple mode.

Along with displayed stats, the following commands are in full mode:

The simple pet window displays the pets HP, MP, loyalty, level and experience. The three buttons on the right are the Summon/Return, Feed and Play commands.

Evolvable pets and Eggsploiter pets can learn and use skills according the their level.

Evolvable pets can learn new skills at levels 1, 6, 11, 18, 25, 36, and 61. The skills are learned automatically upon reaching that level. The skills level up when the pet gets to certain levels, which may result in more damage, new effects, and a higher MP cost.

The level of an eggsploiter pet corresponds to the player's level when it was spawned. Like evolvable pets, a higher level impacts the skill strength and skill availability.

Aside from special skills, pets keep using their skills in combat as long as they have enough MP available.

When a pet or non-evolvable pet dies, you will have to revive it using one of the few given ways.

The most commonly used way is to go to a NPC with the Heal Pet ability (Benny Marshall and Pet Shop Paula). Reviving pets this way will cost a certain amount of gold, equal to the level of the pet multiplied by the evolution factor.

Pets can also be revived using the Musician skill Resurrect Pet. This skill is used to revive only your own pet, as pets cannot be traded when dead.

Another way is by using a Reanimalator.

When a pet deals damage to a monster, it will receive experience points. The experience points a pet receives will be multiplied by the level difference bonus/penalty between the pet and the monster just like players.

For evolvable pets, the experience gained is distributed by the option chosen in the pet window.

For non-evolvable pets, eggsploiter pets, or monsters summoned by the player, the experience points they gain will go to the pet owner.

After evolving a pet, its loyalty is restored to 100.

You can ride level 60 non-evolvable pets or level 61 pets (except the Jade Pet and Love Pet) with a pet saddle. You can fight while mounted: only you can attack, and you will be only the one taking damage. You can also share Experience to the mounted pet.

There are different types of saddles, all which increase the movement speed:

With the exception of the High Quality Saddle, saddles are one-time use and only last for 2 hours, after which you will be dismounted. Going offline or disconnecting also cancels the effect.

Flying on a pet[]

Using a Flying Upgrade Stone on a rideable pet grants the ability to use that pet for flying, instead of flying with a weapon or flying item. This also adds a flag to the small pet window (Ctrl+V).

Players can fly with a flyable pet even if they haven't done the Learn How To Fly quest yet. In this case, the player's basic flying speed will count as 0 before adding in the pet's speed.