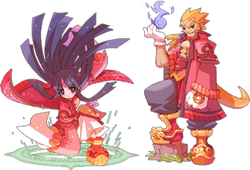 A Shaman uses magic that mainly employs the elemental powers, and is adept at using fast weakening skills, elemental magic, and attacking enemies from a distance.

A Shaman can make good use of their knowledge of the principles of the five elements to cause greater damage to enemies with elemental attributes.

The Shaman occupation observes natural Feng Shui, distinguishes the yin and yang of nature and the operations of natural calendars. They can guide different Qi from the earth and change the regional climates in specific areas. The Shaman can even bring destruction and create negative influence on their targets. They can also enhance their peers' recovering abilities by using the Qi from the ground. Besides, the Shaman can convert the Qi of five elements on their peers or monsters to change the odds as well.

A Shaman is perfectly suited to using wands.

A Shaman is competent using musical instruments, fans, and syringes. Other weapons aren't really suitable for this job.

These skills are magic with relatively short casting times. They are long range magical attacks with strong elemental attributes, and need to be used in conjunction with wands. Each skill can also raise the elemental defense of the target (depending on the element of the attack used). If properly utilized, the damage of these skills can be maximized and even aid other players.

These include skills that weaken a single target.

At low levels they can be used repeatedly in a short time, and are suitable to be used whilst training. At higher levels, both preparation time and duration are extended as the skills become more suitable for use against bosses.

These skills enable you to equip wands whilst in different jobs.